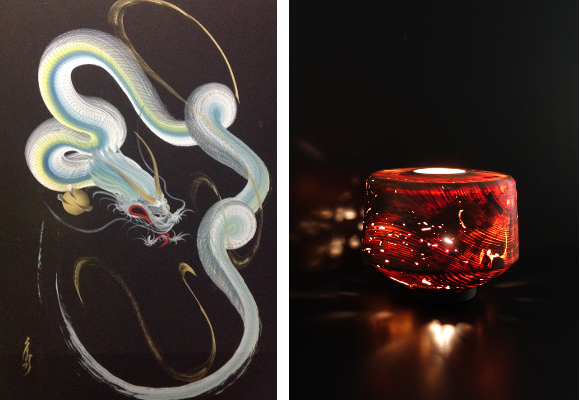 One-Stroke Dragon: The image of the Dragon is revered around the world as the incarnation of God from ancient times and is a testament of Luck. An ancient painting technique, Teshima embodies the tradition and spirit of the “One-Stroke Dragon” style with contemporary ideals. Through drawing the body of a dragon in a single perfect stroke with a large sumi brush and watercolor, the artist can bring someone luck in whatever they seek, such as perfect health, the realization of great ambition, children, a good marriage, and more. The painting is to be used as a lucky charm and is to be displayed prominently in the person’s home.

Tokuma Takebe was born in 1987 in Himeji-shi Hyogo, Japan. Tokume’s work can express life of both plants and materials. He has been creating his wood sculptures surrounded by the majestic nature in Yamaguchi prefecture, the most western part of mainland Japan. In the process of creating, wooden blocks of pine are shaved to 2 to 3 mm in thickness. A translucent appearance emerges from the material that seems to become the “life of nature” itself. His work “lights up” our mind and allows us to reflect upon life in nature. A dynamic, young sculptor, Tokuma has shown internationally, including exhibitions in Japan, Finland and New York.