The Leepa-Rattner Museum of Art is a modern and contemporary art museum. Our collections are broken into three primary areas: 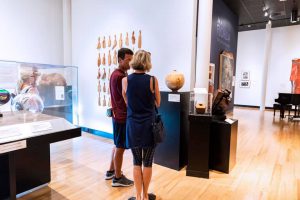 The Leepa/Rattner/Gentle (LRG) Collection was donated to St. Petersburg College in 1997 through the generosity of Allen and Isabelle Leepa. This collection served as the nucleus for the establishment of the Leepa-Rattner Museum of Art.

The primary works in the LRG Collection are by artists Abraham Rattner (1893-1978 - a figurative expressionist), Esther Gentle (1889-1991 - printmaker, sculptor, and painter), and Allen Leepa (1919-2009 - abstract expressionist and author). Also within the LRG Collection are prints and works on paper by 20th century American and European contemporaries of Rattner, including Pablo Picasso, Marc Chagall, Georges Rouault, Fernand Léger and an important bronze head by Henry Moore.

In 2010, the Leepa-Rattner Museum of Art expanded its scope to include much of the permanent collection of the Gulf Coast Museum of Art, which closed in 2009. This collection of 275 objects ranges from landscape paintings by noted 19th century American artist George Inness to contemporary photography by Clyde Butcher. The Gulf Coast Museum of Art Collection includes paintings, sculptures, mixed media works, fine art crafts and works on paper, primarily by 20th and 21st century artists from Florida and the southeastern United States.

Through donations LRMA’s holdings in photography, prints, fine art crafts, as well as in painting and sculpture have expanded since 2002. Individual collections in the LRMA, Inc. holdings include:

Through our partnership with St. Petersburg College (SPC), the Leepa-Rattner Museum of Art is proud to offer free online access to our ever-growing digitized collections. A primary goal of the Museum is to increase access to the arts for all, and creating an online digital repository for our collections is key to accomplishing this goal. For inquiries related to rights and reproductions, please contact us via email at lrma@spcollege.edu.

Works on Paper
A collecting focus of the Leepa-Rattner Museum of Art is works on paper. Works on paper may serve or be viewed educationally as documentation of the art historical developments of Modernism and post-Modernism over the past 200 years. Holdings include examples of 19th century European and American printmaking beginning with Goya and including Manet, Cezanne, Renoir, Homer, Whistler and other notables. Twentieth century European modernist prints include works by Pablo Picasso, Joan Miro, Marc Chagall, Georges Rouault and Fernand Léger, as well as an impressive survey of French printmaking since 1950. American printmaking since 1970 is strong and contains impressive holdings of the graphic works of Abraham Rattner, Richard Florsheim and Leonard Baskin, among others. Additionally there is a large collection of Parisian art and exhibition posters from the mid-20th to the contemporary period.

Artist Repositories
The Leepa-Rattner Museum of Art is fortunate to be the repository of works that chronicle artistic careers. In addition to the core holdings of Abraham Rattner, Esther Gentle and Allen Leepa, LRMA owns collections of David Anderson, Leonard Baskin, Richard Florsheim, Winslow Homer, Tomás Marias and Vladimir Yoffe, including biographic and archival materials.

Contemporary Art
With the acquisition of the Gulf Coast Museum of Art Collection and its emphasis on representing trends in contemporary Florida art, the Leepa-Rattner Museum of Art is expanding into this collecting area through solicitation of donations. Recent acquisitions of work by Jack King, Denis Gaston and Dino Kotopoulis reflect current work by these artists.

Additionally, the Gulf Coast Museum of Art sponsored invitational exhibitions in support of contemporary fine art crafts from throughout the southeastern United States. The Leepa-Rattner Museum of Art desires to continue collecting in fine art crafts, primarily through the solicitation of donations, but focused on the general development of fine art crafts since the 1950s.

Your ticket for the: Collections