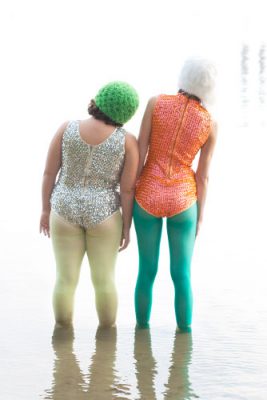 In celebration of the Leepa-Rattner Museum of Art’s fifteenth anniversary, we are showcasing the best of the collection, unveiling new acquisitions, honoring donors and artists, and digging into the vault to unearth never-before-seen works. This two-part series begins with a summer-themed exhibition that pays tribute to our beautiful area in Paradise Found: LRMA Celebrates 15 years. The idea of paradise, bathing beauties, fun in the sun, and the unique qualities of tropical locales in Florida and beyond are interpreted by artists in various mediums throughout the decades.

From the coast of 1930s France to the modern shores of St. Petersburg’s white sandy beaches, the sun, sand and sea life are the subject of exploration as we journey from abstraction to surrealism in vivid color. Luminous beach watercolors by David Burliuk and Abraham Rattner transport you to paradise, while fish fly through surreal tropical scenes in a print by Alexander Calder and a watercolor by Bill Renc. The color and light of summer is conveyed through the pure abstraction of Kenneth Noland’s minimalist shaped canvas painting, as well as Richard Anuszkiewicz’s Op Art interpretation of Clearwater Beach’s blinding spectrum of sunlight.

Also featured are new acquisitions that capture the essence of summer including photography by Selina Román, glow-in-the-dark Japanese painting by Koki Sugita and Steven Kenny’s painting The Arrival. Painted in 2012, Kenny’s larger than life oil painting of a boy in a fur coat on the beach represents a self-portrait, of sorts, as a northerner’s perspective arriving in an exotic new land, having moved from New York to St. Petersburg, Florida.

So, put on your sunglasses and escape the heat in our air-conditioned tropical paradise!

Your ticket for the: PARADISE FOUND: LRMA CELEBRATES 15 YEARS