Stitching the Transatlantic: Liberian Quilts from the John Singler Collection 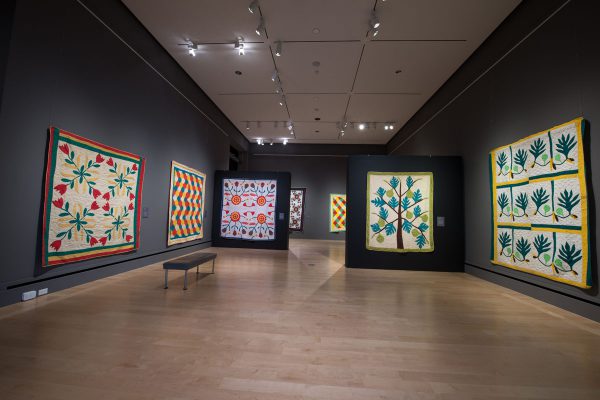 Liberian quiltmaking is a transatlantic tradition. American immigrants, many of them freed slaves and free-born black people, first brought their sewing and quilting skills to West Africa in 1820. They continued to practice patchwork and appliqué as they settled and helped build what would become the country of Liberia, which declared its independence in 1847.

As early as 1857, women began entering their quilts in Liberia’s National Fair contests. In 1892, Liberian quiltmaker Martha Ann Ricks famously hand-delivered a quilt to England’s Queen Victoria as a diplomatic gift. Ever since, gift-giving has been an important element of Liberian quiltmaking. Today, Liberian quilts represent an enduring practice through which generations have documented their country’s cross-cultural heritage and depicted their everyday world.

The quilts in this exhibit are on loan from John Singler, a linguistics scholar who has conducted extensive research in Liberia. His collection features the work of quiltmakers from Liberia’s coastal Montserrado and Sinoe counties, made both before and after the Liberian Civil Wars (c. 1980-2003). These examples illustrate the range of Liberian quiltmaking: patterns borrowed from traditional American quilts, changes in materials and techniques, and the development of imagery derived from local flora and fauna.

The North Galleries of the Leepa-Rattner host the traveling and rotating special exhibitions of the Museum.

Register for Exhibition: Stitching the Transatlantic: Liberian Quilts from the John Singler Collection

Your ticket for the: Stitching the Transatlantic: Liberian Quilts from the John Singler Collection

Stitching the Transatlantic: Liberian Quilts from the John Singler Collection