WOMAN-MADE: A Celebration of Female Artists in the Collections

Leepa-Rattner Museum of Art > Exhibitions > Collections Online > WOMAN-MADE: A Celebration of Female Artists in the Collections

Woman-Made: A Celebration of Female Artists in the Collections 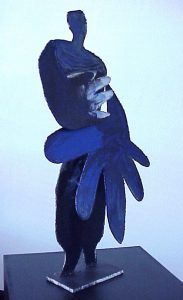 The year 2020 marks the centennial of the 19th Amendment of the U.S. Constitution guaranteeing women the right to vote. The Leepa-Rattner Museum of Art is proud to celebrate the power of the female voice by highlighting a selection of works from the collection by internationally-known women printmakers and sculptors, including Miriam Schapiro, Lesley Dill, Alison Saar, Esther Gentle, Esther Ferrer, Susan Gott, Lin Carte, Hung Liu, Howardena Pindell and many others. Each artist is a tour de force in her own right. Competing in the male-dominated movements in contemporary art, they have paved the way for generations of women artists to follow.

WOMAN-MADE focuses on women artists who explore the physical nature of art- making through printmaking and sculpture—two mediums that have been traditionally associated with men. Here, these women’s strengths are measured in their creativity, concepts and curiosity, ingenuity and prowess in their chosen medium. The hands of these women artists tell their story through the use of plasma cutters, blow torches, molten glass, weaving, carving tools and printing presses.

The power of the female voice was first recognized in the women’s suffrage movement of the mid- nineteenth century and was solidified in 1920 when women received the right to vote. Starting in the 1830s, the women’s rights movement became intertwined with the struggle to abolish slavery. Although the equal right to vote was implied in the 14th Amendment in 1868, most states continued to prohibit women's suffrage. Congress proposed the 19th Amendment in 1878 but it remained a controversial issue for over 40 years. During that time, the women's rights movement became strongly militant, conducting campaigns and demonstrations for the amendment to be passed by Congress and ratified by the states.The service of women in industry during World War I reinforced their political action, which resulted in the adoption of the amendment in 1920 to provide men and women with equal voting rights. This template for organized activism laid the groundwork for a new feminist movement in the 1960s.

The Feminist Art movement emerged in the late 1960s amidst anti-war demonstrations and civil and gay rights movements. Prior to the 1960s, women artists were largely invisible to the public eye, and were often denied exhibitions and gallery representation based on their gender. Feminist artists began to create alternative venues and worked to change institutional policies to promote their visibility within the art market and arts institutions. Miriam Schapiro and Judy Chicago were key figures in the Feminist Art movement, establishing the first Feminist Art program in 1971 at the California Institute of the Arts. They embraced alternative materials that were connected to the female gender and explored performance and video art, which did not have the same historically male-dominated precedent that painting and sculpture carried. This expanded the perspective and definition of fine art.

Because of the progress made by previous generations of feminist artists, many contemporary female artists have moved beyond their need to identify as "women artists" or to explicitly address the "women's perspective." Building on precedents of the 1980s, many began to produce work that focused on their individual concerns and less on a general feminist message, but no less powerful. This exhibition provides a cross-section of women artists that have made their mark in the contemporary art world with unique and powerful voices, regardless of their gender.

Learn About The Artists of the Exhibition

Your ticket for the: WOMAN-MADE: A Celebration of Female Artists in the Collections

WOMAN-MADE: A Celebration of Female Artists in the Collections