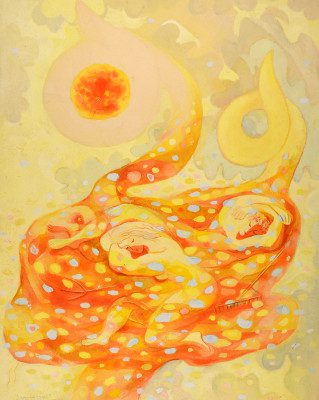 Paris was considered the hub of creative expression in the 1920s and 1930s, and Abraham Rattner was in the middle of it. Well-known artists influenced Rattner’s burgeoning style, worked alongside him, and became friends with him.

This exhibition features work by prominent Parisian artists of the time who influenced Rattner’s work throughout the decades, as well as art history as a whole, featuring 21 works by Paul Signac, Max Ernst, Pablo Picasso, Fernand Léger, Marc Chagall and Joan Miró. Included are rare paintings and precious objects from Rattner’s archives, including his sketchbook and photographs of Monet’s home and grounds, where Rattner briefly lived next door to the great Impressionist painter in 1920.

This small but mighty exhibition is a survey throughout the decades of some of the most influential artists of our time, beginning with an introduction of early Parisian influences in the Post-Industrial Revolution era of mid-nineteenth century France. The evolution of experimental movements begins with Édouard Manet’s transition from Realism to Impressionism, followed by Post-Impressionists such as Paul Cézanne leading up to World War I. Works by Manet, Cézanne, and Pierre-Auguste Renoir are included in the exhibition.

Flooded with expatriate artists, the 1920s gave rise to Surrealism, Cubism, and Jazz music, which continued to gain popularity among artists such as Pablo Picasso, Marc Chagall and Fernand Léger. These artists carried these art movements throughout the 1930s and beyond. A literary movement also spawned great collaborations between writers and artists, highlighting Rattner’s friendship with Joan Miró and the Surrealist magazines that published their work. At the dawn of WWII, Rattner fled Paris but returned many times over the years. In the 1940s-1950s, Rattner renewed friendships with Picasso and Chagall. Viewed as an American statesman of pre-WWII avant-garde, he also connected with a younger generation of Parisian artists in the abstract and expressionist movements.

Your ticket for the: RATTNER’S CONTEMPORARIES IN PARIS